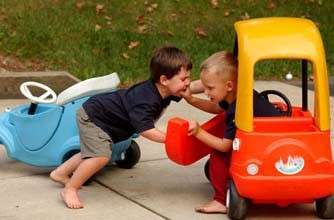 I live next door to a children’s pre-school and during the summer months the children play outside in the yard.  Their happy chatter is often interrupted by raised voices, squabbling and tears as playtime descends into conflict.  As far as I’m aware they’re not fighting over religion, but over some toy or other that two children want at the same time.  This tells me that it is human nature to fall into conflict and we do so for all sorts of reasons.  Sadly sometimes religion can be one of those reasons, but don’t let’s suppose that we would fight any the less without it.