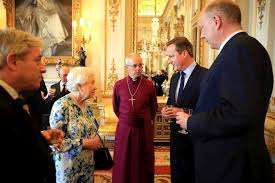 Well it’s not been a great couple of days for our Queen and Prime Minister here in the UK, who were both recorded making less than complimentary remarks, about other countries that we’re trying to forge good friendships with. The result has been a burst of conciliatory comments seeking to smooth over a lot of ruffled feathers! But that’s the danger of being constantly in the public eye, where from time to time a ‘private’ conversation is overheard and becomes very, very public.

On the night before he died and while he was on trial, Jesus’ closest friend, Peter, was just yards away, but when challenged denied three times ever having met him. After the third time Jesus turned and looked him in the face – Peter was deeply ashamed and broke down in tears at what he had done. His private denial was now public and would remain so, written into the gospels about Jesus and remembered for all time.

But that wasn’t the end of the story. Within days Peter is not only forgiven by, and reconciled to, Jesus but is given the greatest commission of his life – to care for the followers of Jesus as that number rapidly started to grow. As someone has said, “It’s not how we fall down that counts, but how we get back up”.