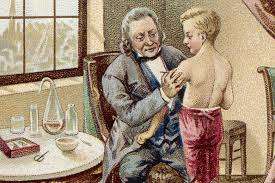 Having nearly died from smallpox at the age of eight Edward Jenner went on to become a doctor. Smallpox was the scourge of the age in which he lived accounting for some 60 million deaths across Europe in the 18thcentury. But Jenner noticed that when someone contracted cowpox, a much milder form of the disease, they became immune from smallpox. To test his theory Jenner deliberately infected a young lad, James Phipps, with matter taken from the sores of a cowpox sufferer. Phipps quickly fell ill and, once recovered, Jenner infected him with smallpox. This time he stayed well. Jenner had discovered the first vaccine – named after the Latin word for cow – and the rest is history.

In a similar way the Bible tells us that we are all suffering from a terrible disease – a broken relationship with a loving God. Untreated it leads to spiritual death. But in his love God has provided a vaccine – his perfect son Jesus who carried immunity from death. It’s freely available to all but, like any vaccine, in order to benefit from it we must first be willing to take it.