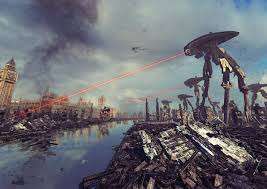 Two nights ago I was in London’s West End for the gala opening of Jeff Wayne’s musical version of War of the Worlds. For those unfamiliar with the story it relates the imagined invasion of the earth by Martians at the end of the 19th Century. The human race responds to this threat with brute force but the weapons of earth are no match for the overwhelming firepower of the Martians. In the end, however, where brute force fails, it is the shedding of human blood containing disease-carrying bacteria, and against which the Martians have no resistance, that proves to be the salvation of the human race.

On the way home I reflected that so often in life the battles we face are not won by brute force, but rather by the invisible qualities of love and grace that disarm in a way that violence never can. So Jesus goes to Jerusalem and takes on the overwhelming powers of death, not with a display of force, but with a perfect display of love’s power. As the apostle Paul later writes Jesus disarmed the powers of death and evil, triumphing over them not with force, but with the shedding of his own blood on a cross. Therein, Paul says, lies the salvation of the human race.