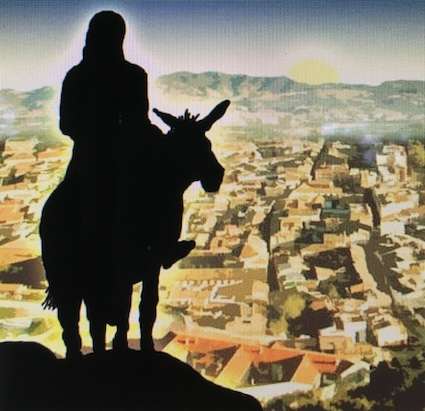 In about 1913 two politicians met at the Central Café in Vienna. Discussing the likelihood of a Russian revolution one looked across the room and said, “And who’s going to lead it? – him?” The man to whom he referred was none other than Leon Trotsky, renowned at the time for idleness, but who would indeed lead a revolution that would change the course of history.

At the beginning of this Holy Week we remember another unlikely looking revolutionary – a carpenter-turned-preacher from the backwater that was Nazareth. When Jesus rode into Jerusalem on a donkey on that first Palm Sunday, not many of those looking at him would have imagined that he would lead a revolution that would change the course of history.

But the sceptics were wrong – both about Trotsky and about Jesus. The difference between them was that whereas Trotsky’s revolution began with a denial of God, Jesus started with the assertion that hewasGod. Perhaps this explains why the upheaval that Trotsky initiated was ultimately short-lived, but the revolution that Jesus began continues to touch and change lives around the world.

It is no longer possible to listen to this story in the iOS version of the app, but you can do so by downloading the Turn The Page podcast from iTunes