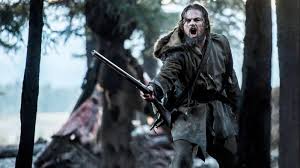 Well congratulations to Leonardo Di Caprio on finally winning the Best Actor Oscar on his 5th nomination. Di Caprio was nominated for his portrayal of Hugh Glass, a 19th century frontiersman mauled by a bear and left for dead by those who were supposed to rescue him. Miraculously surviving Glass sets out to take revenge on those who abandoned him, but during his journey receives wise advice from a fellow traveller that “revenge is in the Creator’s hands”. I won’t spoil the film for you by telling you what Glass does with this advice, but that feeling of being hurt and let down and wanting to exact revenge is universal – we’ve all been there.

The question is whether it is right for us to seek revenge ourselves, or whether we can entrust our hurt and pain to a God of justice. If there is no God then our internal sense of justice will drive us to seek revenge on our own terms, but as we see all around us this usually leads to a downward spiral of tit for tat from which no one emerges as the winner. But the Bible declares “Will not the Judge of all the earth do right?” and the apostle Paul writes, “Do not take revenge dear friends, but leave room for God’s wrath, for it is written: “It is mine to avenge: I will repay” says the Lord.