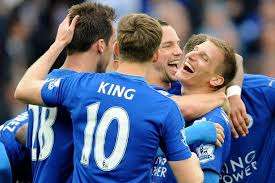 Well it’s been a great week for Leicester City Football Club winning the English Premier League for the first time in their 132 year history; and credit where credit’s due I’m delighted to have played a part in their success. In 1964 – the year that I was conceived – Leicester won the League Cup Final – clearly a portent of things to come – my birth in that city at that time laid the foundation for the success that was to follow.

Of course such a claim is ludicrous – in fact as ludicrous as the claim made by many in Jesus’ day that their good lives would earn them a place in heaven. He rather burst that bubble by pointing out that if they did end up there, it wouldn’t be because they deserved it or had earned it. Take for example the tale of the Pharisee and the tax collector who go up to worship at the Temple – the Pharisee tells God how wonderful he is at keeping the law and despises the tax collector as a miserable sinner. He, however, won’t even look up to God but beats his chest and asks for God’s mercy. Jesus says he’s the one who goes home forgiven. Unlike winning the Premiership eternal life is a gift that God freely gives, not a reward for hard work.