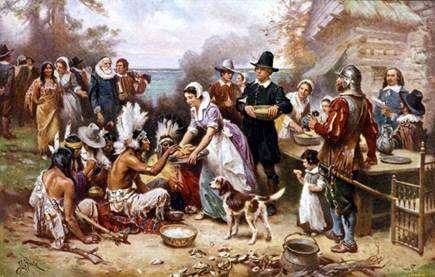 By the Spring of 1621 only half of the Pilgrims who had arrived aboard the Mayflower were still alive, and their chances of survival seemed slim.  But providence was on their side.  Seemingly by chance they happened upon an Abenaki Indian by the name of Squanto.  To their surprise he not only spoke English but was willing to show them the tricks of growing corn in the sandy soil, and which poisonous plants to avoid.  Where had he come from?

In 1614 Squanto had been taken to Spain to be sold as a slave, but was rescued by Catholic monks and taught English and the Christian faith.  He returned to America five years later to find that his people had been wiped out by disease.

But far from harbouring a grudge against Europeans he instead displayed great kindness, and without his help the Pilgrims might well have perished.  In gratitude the settlers ordered a Thanksgiving festival, to thank God for His timely and unexpected provision.

Four hundred years later the festival of Thanksgiving retains its central place in the American calendar and reminds us all not only to thank God for His providence, but also to extend kindness to those who are not like us!