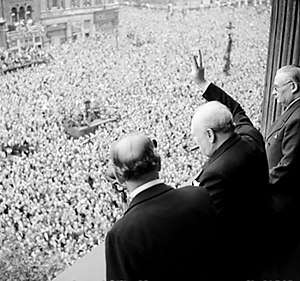 At 11.01pm on 8th May 1945 the German surrender was signed, and Victory in Europe declared. People poured onto the streets, and from the balcony of Buckingham Palace the King and Prime Minister joined in the celebrations of a hard-won victory over tyranny.

But Europe was a continent in ruins. Some regions were on the brink of famine and the threat of Communism was marching west. Having won the war now it was time to secure the peace.

Likewise, from the cross Jesus declared a final victory over the tyranny of sin and death. But human nature was in ruins. As St Paul put it people were ‘filled with every kind of wickedness, evil, murder, strife, deceit and malice… senseless, faithless, heartless and ruthless.’ Jesus may have won the victory. Now it was time to secure the peace and, as St Paul discovered, that peace was found by turning to Jesus. Writing to the church in Rome he asked. ‘Who will rescue me from this body of death?’ and answered by declaring ‘Thanks be to God – through Jesus Christ our Lord!’