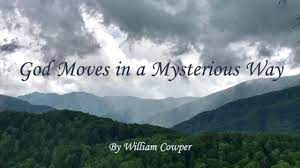 It is often remarked that ‘God moves in mysterious ways’. The phrase originated in a famous 1773 poem by William Cowper entitled ‘Light Shining out of Darkness’. It was inspired by his own experience. As a young man Cowper was refused permission to marry the woman he loved and fell into a depression which was to blight the rest of his life. On several occasions he attempted to take his own life. In one such attempt he decided to drown himself by jumping into the Thames and called for a cab to take him there. As they set off a thick fog settled over London and despite his best efforts the cab driver simply couldn’t find the river. Eventually he pulled up at the side of the road and told Cowper that he would just have to get out and find his own way. Cowper duly alighted from the cab and stepping onto the pavement realised that he was standing outside his own front door. Clearly God hadn’t finished with him yet and had taken him home!

Despite his struggles with mental illness Cowper, as a Christian, knew that God loved him and trusted that God was at work behind the scenes. His story reminds us that while God’s ways will always be beyond our comprehension his love and compassion will always be near at hand.