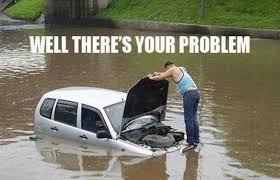 It’s not that I’m losing confidence in my breakdown company, it’s just that in the process of diagnosing last week’s overheating problem the mechanic managed to break another pipe that is costing £470 to fix; and on a previous occasion two separate mechanics from the same company failed to spot that the reason for the clunking noise the engine was making was the fact that it had not a drop of oil in it!

But I am becoming a little wary that those who present themselves as experts may not necessarily be all that they appear to be. In this season of Lent we are remembering Jesus being tempted by the devil in the desert for 40 days before beginning his public ministry. The devil presents himself as an expert in world affairs and tries to convince Jesus that if only he will listen to him, then he can become the Saviour of the world without it costing very much. But Jesus isn’t taken in – he won’t take short cuts and abuse his heavenly power, but will rather become obedient to suffering and death. This is a God who is not content to sit above the reality of suffering in our world, but who chooses to enter fully into it in order that he might save us from it.