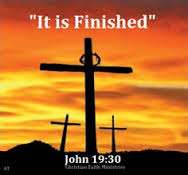 The TV drama Cold Feet charted the ups and downs of 3 thirty-something couples living in Manchester. It was a huge hit and millions followed every twist and turn. Towards the end of the fifth series all was finally coming together for the youngest couple Rachel and Adam – their relationship was back on track, they had a child and were about to buy their own home. And then Rachel’s car was hit side on by a lorry. She died instantly. No one saw it coming. Everyone was stunned. Adam’s world crumbled around him, his hopes and dreams shattered in an instant.

Familiarity with the Easter story means that we forget that not one of Jesus’ friends saw his death coming, and when he was nailed on a cross on that first Good Friday, they were stunned and devastated. As Jesus died, so their hopes and dreams died with him. Their world crumbled around them and they fled in fear. They never expected to see him again. They thought it was the end of the story. But it wasn’t. As he died Jesus spoke from the cross and declared, “It is finished” – not a cry of despair but a declaration that his work was done. Far from being over, the story was just about to begin.