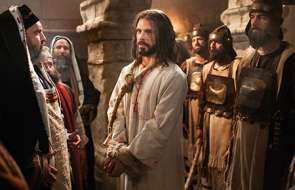 If anyone ever had a reason to try and justify themselves it was Jesus. He lived a perfect life and yet for the three years of his public ministry was misunderstood, maligned and persecuted. False accusations eventually led to a show trial and condemnation. But at no point did he seek to retaliate and have his say. No big interview in front of the Jerusalem crowds to put his side of the story. Rather contentment with the fact that he was living in obedience to his Father in heaven who delighted in him.

The Old Testament Prophet Isaiah foresaw all of this saying of Jesus, ‘he was led like a lamb to the slaughter; and as a sheep before her shearers is silent, so he did not open his mouth.’

It is of course human nature to want to try and justify ourselves especially when we feel hurt and misunderstood. How liberating then to be able to live as Jesus did, unconcerned by what others thought of him and focussed instead on delighting his Father in heaven. How different our world might be, and how much more reconciliation might we see, if we could all discover the humility to do the same.