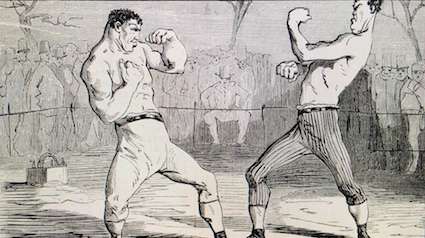 Published in Philadelphia in 1810 The Mirror of Taste magazine carried the following report,‘A young fellow threw his hat into the ring and followed, when the lame umpire called out “a challenge,” and proceeded to equip the challenger for the game. … He then walked round the ring till a second hat was thrown in, and the umpire called out, “the challenge is answered.”’ So was born the expression that is now back in the news as a leadership contest to find a new leader of the Conservative Party begins. It’s likely to be a crowded ring but in the end only one victor will emerge.

While the phrase didn’t exist back then it certainly describes Jesus’ action in going to the cross 2,000 years ago. Sin and death had thrown their hats into the ring centuries before but until Jesus came along, no suitable contender for the fight had been found. As the fight was joined sin and death were sure they had dealt life itself a knockout blow, but they had misunderstood Jesus’ final cry, ‘It is finished!’ They thought that he was finished, but what he really meant was that his job was done, and they had been defeated.