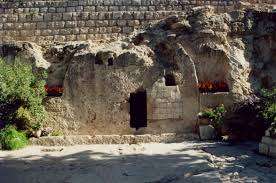 Exactly one year ago a gang of thieves was preparing to pull off one of the most audacious burglaries in English legal history. Over the Easter weekend they would break into one of the most secure vaults in London’s diamond quarter, and make off with millions of pounds worth of diamonds, gold and jewelry. The burglary had been years in the planning, but the thieves left a trail of evidence that led to them being quickly apprehended, and the ringleaders then confessing to their part in the crime.

Somewhat different then to the great escape effected from another vault 2,000 years ago in the outskirts of Jerusalem. This time a tomb sealed with a huge stone and guarded by Roman soldiers, and the contents not diamonds and gold, but the cold corpse of an itinerant preacher from Galilee who kept making outrageous claims to be God. When his grieving friends discovered the tomb empty they assumed that the body had been taken – what other explanation could there be? But then they met Jesus again and came to another conclusion: this was indeed God incarnate and he had walked out of the tomb. It was the defeat of death, the end of separation from God, the certainty of new and eternal life. Their lives would never be the same again.