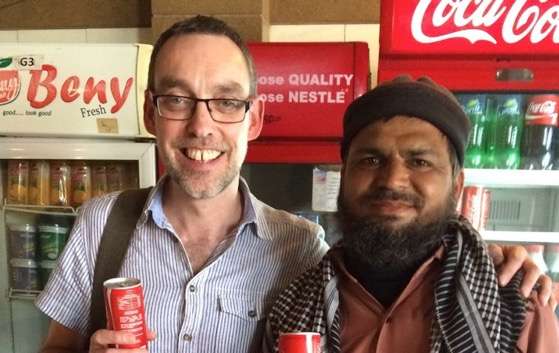 In 2016 I was travelling with friends from Lahore to Faisalabad in Pakistan.  It’s rare to see Europeans, and so when we stopped for a break, I drew some attention and people were interested to know why I was there.  The Muslim owner of a small supermarket welcomed us warmly and was pleased to give us food and drink free of charge.

We explained that we were Christians and that we were visiting churches in his country.  In response, he placed his arms around our shoulders and said, “We’re created by the same God, and the most important thing for us to do is to love each other.”  Wise words indeed.

There are very real differences between the beliefs of Muslims and Christians, but the way to react to our differences is surely through peaceful relationship and conversation, rather than bullet and bomb.  Whenever we resort to the latter, we have ceased to reflect the image of God in which we are made, and lose all authority to claim to speak in His name.  As we have seen yet again this week we find the true image of God not in the actions of those who choose to kill, but in the actions of those who choose to save.